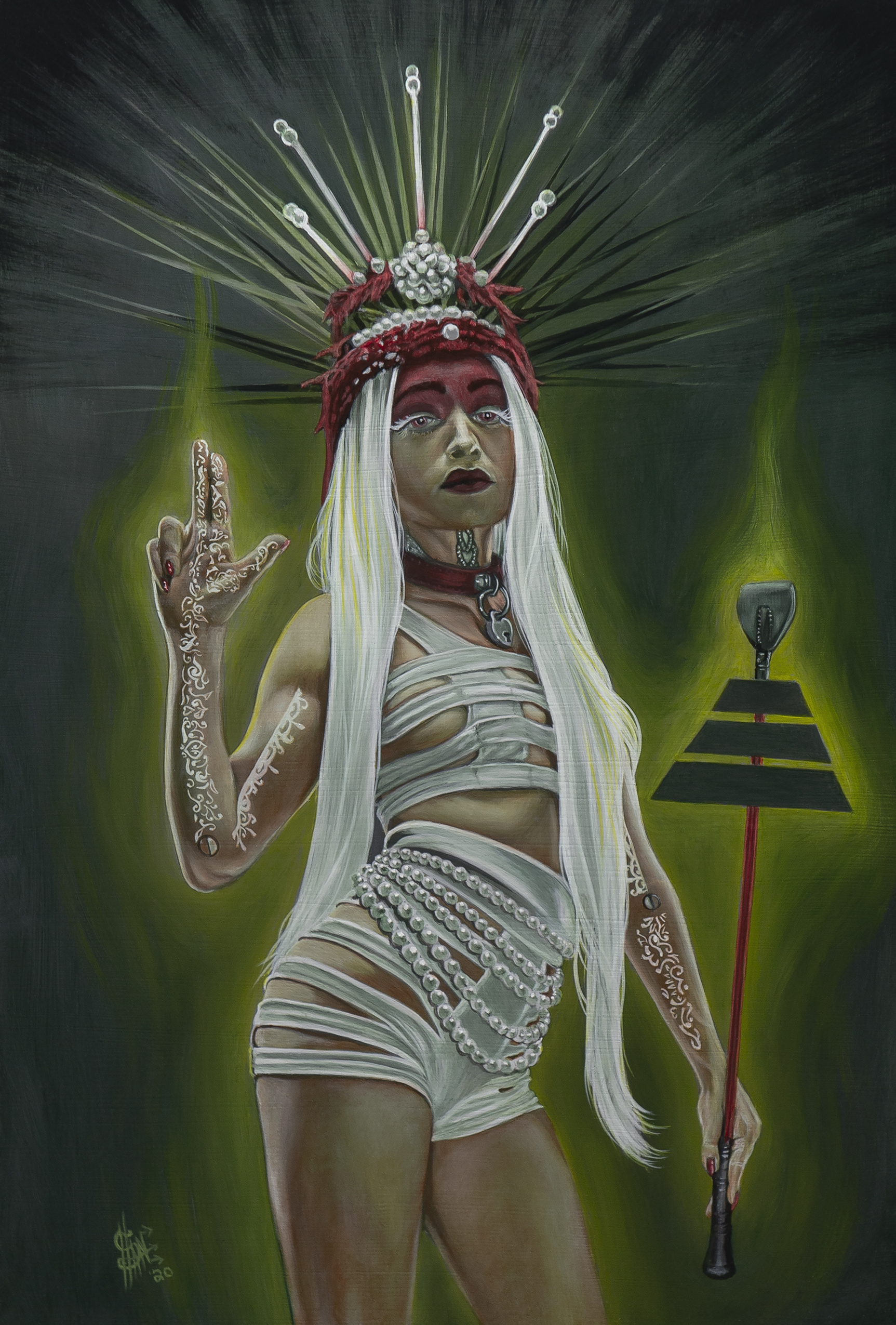 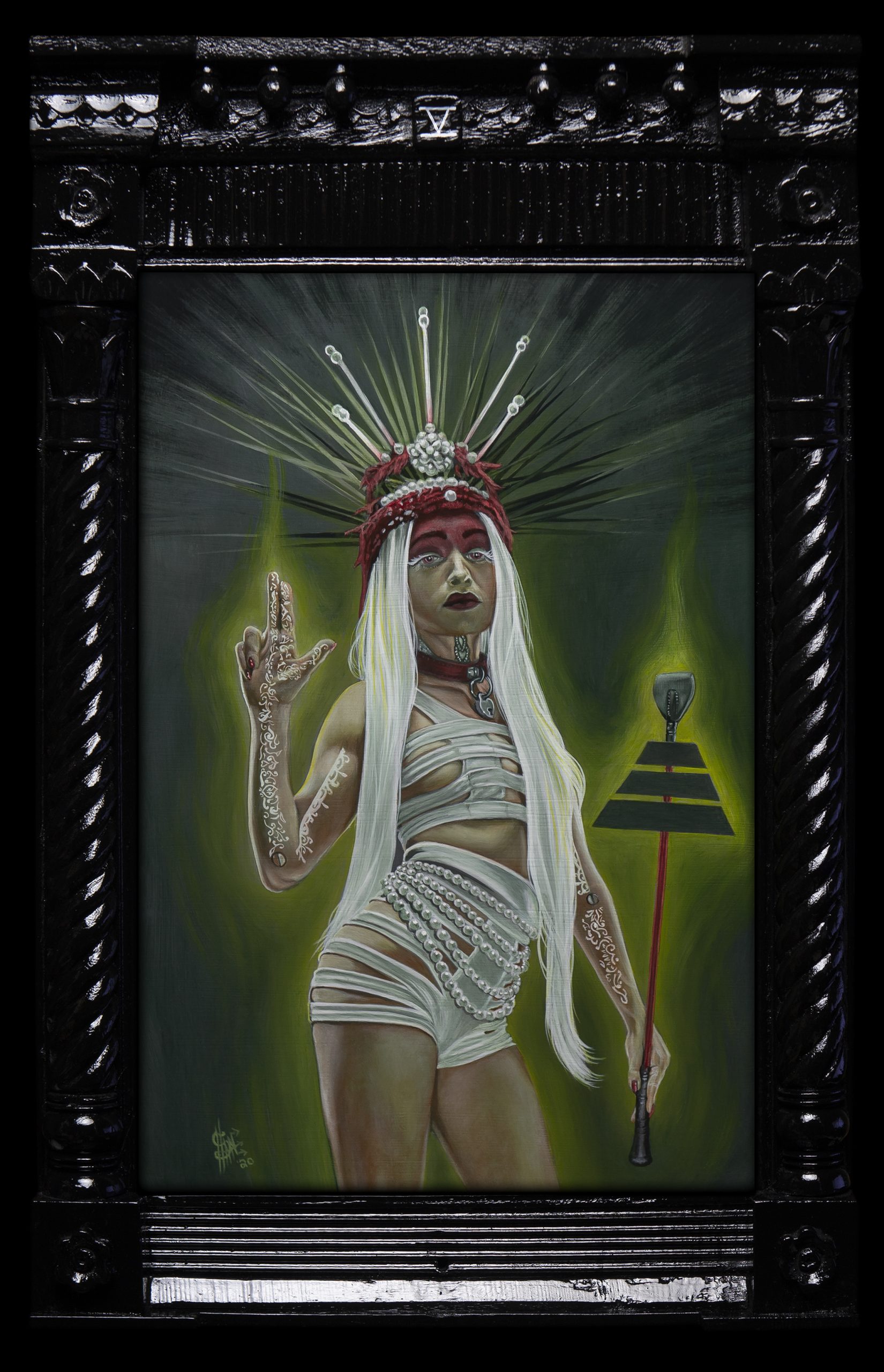 He is a romantic dreamer – the modern version of Caspar David Friedrich’s “Der Wanderer über dem Nebelmeer” walking through the world with the curiosity of a child fantasizing about new adventures. The question is a reference to Ed Ruscha’s American Type paintings, which also allude in an ironic way to the myths of American romanticism including commercial slogans. It is a hint to our digital world which gives us access to any scenario we could dream of without moving our butt from the cosy sofa at home.

Josephine Kaiser was born in East Berlin in 1974. She graduated from the Munich City School of Design in 1996. Kaiser has been working with modeling clay since 1995 and makes paper cuts since 2011. She has been present at various fairs, single and group exhibitions in Germany and abroad. Today she lives in Munich, together with Ransome Stanley and their two children.

Both the crescent moon and her owl companions behind this mysterious person suggest hidden knowledge. The pomegranates remind us the of the Garden of Paradise whose forbidden fruit was actually a pomegranate not an apple. The High Priestess reminds us to look inward on our search for knowledge and keeping that knowledge inward is absolutely ok –especially in a world where we often feel that we have to put everything out there.

I live on the Black Isle with my husband, the artist Erlend Tait. A little explanation about my work – I was talking to someone about how I create all the little characters in my work and he taught me a new word, Pareidolia. This is the psychological phenomenon where the mind responds to a stimulus by perceiving a familiar pattern where none exists, and this is exactly what happens when I look at trees. By visually exploring the lines and forms created by the overlapping branches of trees, a gathering of sweetness and darkness appears. And through this personal connection with the trees in my landscape I also create my own folklore.

Linsay Blondeau is an artist originally from the West of Canada and currently residing in the Canadian national capital, Ottawa. Her work is both whimsical and transcendent in form and composition, drawing on such diverse inspirations as 19th Century children’s illustrations, Northern European folklore, Art Nouveau, Medieval grotesques and even potential references to Jungian archetypes. A multi-media artist, she has worked largely in pen and ink or watercolour; however, always seeking to broaden her horizons and find new and innovative ways of bringing old motifs into a 21st Century context, she has experimented in translating her visions into other forms of media as well including: acrylic on wood; mixed media sculptures reminiscent of traditional agrarian fetishes interpreted as anthropomorphised Victorian children’s dolls, and a variety of leather works. Her most recent series explored esoteric mysticism within a three dimensional tableau inspired by Gothic monasticism.

My mission is to depict the depth of the human experience through the exploration of visceral imagery, honest emotion and the common threads that tie us all together. My artwork revolves around the idea of healing, despite emotional turmoil, trauma and grief. I paint people I know, places I’ve explored and animals that have crossed my path. Shane Izykowski has a colorful history of professional artist positions, including the lead artist at Madame Tussauds SF, a preparator at the SFO Museum, a set designer for theatrical productions, a curator and gallery director, and a production designer for films. Currently, Shane is a full time artist known for oil paintings of dark imagery that reflect the shared human experience of grief, suffering and healing through imaginative storytelling. He is also the host of the Drawing From Experience Podcast.

I like to tell stories with my art. This one is about the complex journey of the lovers. About the 90ies when a Persian friend drew the tarot-cards (Rider-Waite tarot deck) for me the first time.

It’s about dedication, about passion and trust. Trust is also the basis for my no-look-drawings (drawing without looking a the canvas) so this technique felt perfect for the task.

My card felt so extreme complex that one canvas just wouldn’t do it – I had to paint a triptych with every canvas focussing on a different aspect.

Corinna Naumann draws and paints emotive portraits, LGBTQI+ themes, nature and her inner worlds. She combines different materials experimentally and searches for beauty in details, meaning, growth and disruption. For ARCANA, she turned deep inside herself, as her card supported her decisiveness as an artist in corona times: striving forwards, acknowledging change; re-synergizing neglected aspects of herself. CHARIOT is a hommage to Alphonse Mucha, as to her female instincts and bond to nature, and a very personal self portrait. She is based in Aschheim / Germany and has a background in art history and art education.

My art comes from an urge to explore. I like the countryside. I like a good view. And once I’m face to face with a lovely scenery, I feel immediately tempted to find out what it’s concealing. The dark goings-on behind the façade of nature, you might say, or the hidden machinations of the animal kingdom. To imagine and express this, I usually tap the lines linking religious icon art, renaissance painting and comic culture. I am particularly thrilled by the kind of spiritual terror you find expressed in the paintings of the old Flemish masters, and I’m trying to find out what happens when you apply that mood to the serene and harmless world of rural folk art.

Allun Turner was born in Phalaborwa, South Africa in 1964. He studied visual art in Johannesburg and participated in group exhibitions. His career in advertising and television spanned 25 years which widened his eclectic artistic horizons before moving to Germany in 2012. He is known for his portrait painting but enjoys working in various mediums. He has exhibited in Munich, including participating in various group exhibitions and two solo exhibitions. His current focus is interpreting rites of passage. Allun lives and works in Munich.

10 The Wheel of Fortune

As the founder of the Urbansurrealism movement I utilize Portland Oregon where my studio is and explore the industrial area with its denizens and street characters, graffiti and chaos to stimulate my imagination and add realism to my paintings.

Wheel of Fortune (2020)
Acrylic on panel

The Munich based artist Alexandra Lukaschewitz creates sculptures and pictures from paper. Growing up in the Bavarian alps she developed a deep love for nature and all it’s creatures. She also is deeply influenced by Science Fiction, atomic age culture and natural sciences. Her anthropomorphic creatures quote pop culture as well as natural history. Blending these themes together to tell new stories as she treasures narrative. Her creations trigger empathy and a personal connection with the viewer. She has a fondness for the curious, the wonderful, the fragile. Her creations found homes with international collectors. Alexandra lives and works in Munich.

My name is Rysz Merey; I am a Munich based artist and writer a bit of a shut in. Though I have for many years focused on traditional art (mainly ink, on paper and on wood), I have this last year branched out into digital art and am currently trying to put together a zine of digital pictures. My drawings focus on relationships, trans stuff, angst, the body, sex, mental and physical illness.

Mario Klingemann is an artist who uses algorithms and artificial intelligence to create and investigate systems. He is particularly interested in human perception of art and creativity, researching methods in which machines can augment or emulate these processes.

He is considered a pioneer in the field of modern AI art, his award-winning work has been featured in major art publications as well as academic research and has been shown in international museums and art festivals.

Kim Gordon is an artist living and working in New York. The worlds she creates echo her interest in spiritualism, myths, historical events and her family heritage. She prefers to paint on wood as the grain, and other natural elements of the material, contribute their own story to every piece. She studied at the Pratt Institute in Brooklyn. Kim Gordon’s art is exhibited, featured and collected nationally and internationally. Gordon’s recent exhibitions include the annual Laluzapalooza show, hosted by La Luz De Jesus Gallery in Los Angeles, CA. Her first show (acting as curator), titled, “Hope Beyond” brought together a talented roster of artists to successfully raise money for the victims of Hurricane Sandy. Additionally, Gordon donates her works to charitable causes, including the Sea No Evil Art Show, Pangeaseed and Habitat For Humanity. Gordon’s work has been featured by a number of publications, including Beautiful Bizarre Magazine, Clutter Magazine, Complex Magazine, Wired Magazine and Hi-Fructose magazine.

Brigitte Yoshiko Pruchnow is a German Japanese painter who lives and works in Munich, Germany. She holds a diploma of the Munich Film Academy and a M.A. in Japanology, History of Art and Philosophy. She received training in Chinese calligraphy, traditional Chinese ink painting and traditional Japanese painting technique (nihonga with Aguri Uchida) and worked as a graphic novel artist 1992 – 1995 (published e.g. at Bizarr publishing house, Prinz Munich city magazine, Comicstrich). She showed her work in various galleries and art fairs in Japan, the USA, and allover Europe.

Erlend Tait is an artist from the north of Scotland. He studied drawing and painting at Gray’s School of Art before learning the ancient techniques of glass-painting and -staining. Both traditions of oil painting and stained glass inform his portraits of imaginary friends.

He is a Professional Member of the Society of Scottish Artists and exhibits throughout Scotland and internationally. He lives on The Black Isle with his wife, the artist Pamela Tait, with whom he also collaborates and exhibits.

Carolina Seth is a Spanish painter and illustrator who works in a surreal narrative style. She creates dreamy worlds inhabited by curious and beautiful creatures. Her Asian heritage and fashion background have influenced her style, creating sleek, visually elegant imagery, always with an element of mystery and playfulness. Carolina has exhibited in numerous galleries and currently lives in metro Washington DC, where she creates from her home studio.